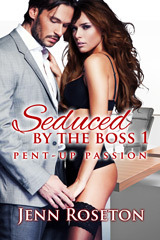 A Curvy Coldwater Christmas (Coldwater Springs #5)
When Kate is asked by her friend, Sarah McCord, to appear as Mrs. Claus in the Coldwater Springs Christmas parade, she doesn’t know what to think! After all, she’s only twenty-nine. And although she has a very curvy figure, she’s not matronly and gray-haired - yet.

But when she finds out that the hunky guy she’s admired for the last few months, Flynn Winters, will play opposite her as Santa, she’s glad she agreed to take part. Especially when the script calls for them to kiss ….

This is a sexy contemporary romance novelette of approximately 6,800 words. Although it’s part of the Coldwater Springs series, it can be read as a stand-alone.

His Tempting Bride (Millionaire Cowboys #1)
The first book in the spin-off series from the popular Billionaire Brothers series.

When curvy event planner Heather Lancaster meets Gage Coltson in a New York City hotel, she’s instantly attracted to him. And when she helps him out, he repays her by inviting her to vacation on his ranch.

But when her sister shows up to “rescue” her, she discovers that Gage is related to the billionaire Trask brothers.

Stressed out Heather succumbs to his - and his ranch’s - charm. And when she rescues a puppy, Gage helps her care for the appealing creature.

As her two-week vacation turns into three, she slowly falls in love with the sexy rancher. But what about her career in New York? Should she risk it all for love? Could Gage ever love her - and her curves?

This is a sexy contemporary romance novella of approximately 31,500 words.
03

When the five Trask brothers and their wives gather together for Christmas, they're all looking forward to relaxing and celebrating the holidays.

But when the Trask brothers decide to cook the Christmas dinner, it's one disaster after another, until they realize that love and family is what Christmas is all about.

This is a short holiday story of approximately 7,500 words and can be read as a stand alone.
04

The Cowboy's Runaway Bride (Billionaire Brothers #1)
What happens when a runaway bride meets a wealthy cowboy?

Realizing her wedding is a sham, curvy Maddie Stanton takes to her kitten heels and escapes the ceremony - still dressed in her bridal gown!

Stranded on the Wyoming highway with a flat tire, rescue appears in the form of Garrett Trask. When the handsome cowboy hires her to work on his ranch, Maddie jumps at the offer, grateful to leave her past behind her.

She never counted on falling in love …

But when she discovers a secret from Garrett’s past, her newfound happiness is shattered. Can this sexy cowboy convince Maddie he loves her, and her curves? Or will she forever remain the runaway bride?

This is a sexy contemporary romance novella of approximately 27,000 words.

Half an hour later, they rode back to the barn. “You don’t want to overdo it for your first time.” Garrett dismounted easily and tethered the horses to the post, then came to help her down. “Take your right foot out of the stirrup, swing your leg over, then place your right foot on the ground.”

She tried to obey his instructions, kicking her right foot out of the stirrup before swinging it backward. Clenching the horn with a death-grip, she hovered in the air, her left foot still in the stirrup and her right hand grasping the back of the saddle. She didn’t think she could do it. Wobbling slightly, she sighed in relief when Garrett’s strong arms wrapped around her waist.

“I’ve got you,” he murmured, his warm breath brushing her neck. A shiver raced down her spine. He helped her off Prince, untangling her left foot from the stirrup. She turned to him, a little dizzy.

“Thank you.” She looked into his dark brown eyes, wanting to melt into their depths. Despite her best intentions, she was definitely attracted to this man. But what did he feel about her?

“You’re welcome.” He gently smoothed her hair back from her face. “You might want to take a bath tonight, since you’re not used to horse riding.”

She gave the briefest of nods. Her eyes remained locked on his. She didn’t want to do anything to break the sensual spell.

Garrett’s hand touched the small of her back, his thumb caressing her spine, urging her to take a couple of steps closer to him. She obeyed willingly, her heart thudding with anticipation.

He gazed down at her, threading his fingers through her hair. She held her breath as his lips descended, until they were only a heartbeat away from hers. “Maddie,” he murmured.

She waited for the touch of his lips …
05

Curves and the Cowboy (Coldwater Springs #1)
When curvy Sarah Grant comes home to Coldwater Springs after spending six years in the city, the last person she expects to bump into is sexy Chase McCord. After having a teenage crush on him for years, she thought she was finally over him. After all, why keep fantasizing about someone you can never have? But when Chase makes it clear he’s ready to claim her for his own, Sarah finds it hard to believe him. Can he convince her they were made for each other?
06

The Tycoon's Reluctant Bride (Billionaire Brothers #2)
When city tycoon Alex Trask proposes to curvy Laura, she thinks he’s crazy. After all, they’ve only met once and haven’t even kissed!

But when he offers to help her company solve its cash flow problems and stave off bankruptcy, what other choice does she have?

Since he’ll only assist her if she agrees to marry him, Laura becomes a whirlwind bride. Since one of Alex’s conditions is they have a real marriage, she risks her heart by falling in love with the enigmatic billionaire.

But will she ever discover the real reason Alex proposed? Could he ever fall in love with a curvy girl like her?

““The bed’s comfortable.” A sexy grin rumpled the corners of his mouth. “I come here whenever I can get away from the city.”

Alone? Laura wanted to ask, but didn’t, in case she didn’t like the answer. A sudden thought occurred to her. What if … what if their definitions of marriage differed?

“Alex.” She licked suddenly dry lips, barely aware that he’d caught the small movement and turned all his attention on her. “When … when you said a real marriage …” she paused. This was so awkward. Why on earth hadn’t she thought of this before she’d married him?

“I meant a real marriage.” He pulled her towards him, until there was barely an inch of space separating their bodies.

Finding it hard to think, let alone breathe, Laura tried again. “Yes, but what about … other people?”

He scowled. “There won’t be any one else in our marriage, Laura,” he said firmly. “Just you and me.”

Relief flooded through her. “Okay,” she whispered, allowing herself to relax in his embrace.

The next instant, he tightened his arms around her. “I hope we’re clear on this point,” he growled.

“Very,” she managed to utter, before he kissed her.

His lips claimed hers, his tongue demanding immediate entry. Surrendering with a small sigh, Laura curled her arms around his neck as he deepened the kiss …”

This is a sexy contemporary romance novella of 33,000 words. Although this is the second book in the Billionaire Brothers series, it's a complete, stand alone romance.

Curves and the Sheriff (Coldwater Springs #2)
When Libby Grant breezes into Coldwater Springs, Wyoming, the last thing she expects is to be pulled over on the highway by Sheriff Jake Morgan. Sparks fly when Jake suspects her of being a con-artist and is tempted to arrest her!

But when he discovers the real reason she’s in town, he finds he can’t get curvy Libby out of his mind - or his heart. Can he convince her that his feelings for her are real?
08

Curves and the Rancher (Coldwater Springs #3)
When Cassie’s car breaks down in Coldwater Springs, Wyoming, she’s in a bind. On the run, she doesn’t know who she can trust.

Until she meets Luke Jackson. The hunky rancher captures her heart and helps her face her fears. But can he convince her that he’s fallen in love with her, and her curves?

This is a sexy contemporary romance novelette of approximately 12,700 words.
09

Curves and the Rodeo Star (Coldwater Springs #4)
When Emma meets ex-rodeo star Cade Winters, she finds him a little too cocky for his own good! Although he’s attractive, he can be infuriating at times.

When he trains one of the horses she cares for, she runs out of excuses to avoid him. Thrown together almost daily, she sees a different side to him and realizes she’s fallen in love with him.

But what does Cade feel about her? Can he truly love her - and her curves?
10

The Rancher's Royal Bride (Billionaire Brothers #4)
When a threat is made against her, Ellie Sterling is sent to hide out at Logan Trask’s ranch in Wyoming. She doesn’t know who is after her. Or why. She’s a curvy illustrator, for goodness’ sake, not a crime fighter.

Retired SEAL Logan is asked to look after Ellie. When he finds her curves more tempting than he thought possible, suddenly he’s the one in danger - of losing his heart.

But when revelations from Ellie’s shadowed past take her by surprise, Logan is the one she turns to. Can this burned-out SEAL give her a safe haven in his strong arms, despite having a secret of his own?

This is a sexy contemporary romance novella of approximately 31,000 words. Although it’s part of the Billionaire Brothers series, it can be read as a stand-alone romance.

“I’m … I’m glad you’re here,” she confessed. Although his hands were just touching her shoulders, she felt safe in his loose embrace.


Their gazes met and held for a long second, then Logan’s mouth oh-so-slowly descended.

Ellie’s pulse skittered and she held her breath.

He kissed her lightly, softly. A tingle of electricity zipped through her. Then his lips claimed hers once more. Ellie sighed against his mouth as the kiss intensified. Just as her arms stole around his neck, he stepped back, wrenching his mouth from hers.

“Sorry.” He raked his hand through his hair. “I shouldn’t have done that.”