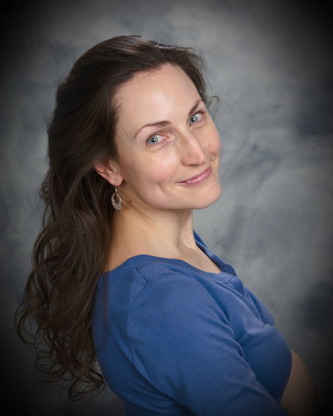 Christine S. Feldman writes both novels and feature-length screenplays, and she has placed in screenwriting competitions on both coasts. She lives in the Pacific Northwest with her ballroom-dancing husband and their beagle.

Pastels and Jingle Bells (Heavenly Bites #1)
Trish Ackerly never expected to cross paths with Ian Rafferty again, but when she spots the former bully of her childhood years through her bakery window, she thinks she may just have been given the best Christmas gift ever: the opportunity to finally give Ian the comeuppance he deserves.

But clearly she does not have a knack for this whole revenge thing, because before she can make good on her plans, Trish gets inadvertently drawn into Ian’s life in an unexpected way that lets her see just how different the man is from the boy he used to be. In fact, much to her astonishment, she actually starts to like the guy. A lot.

Trouble is, Ian doesn’t know who she really is, and explaining it to him is going to be a little difficult now—which is bad news, because Trish is starting to realize that all she really wants for Christmas this year… is Ian.
02

The Bargain
Tomboy Shannon Mahoney has always been a lot more comfortable with power tools than high heels or lipstick, and she wishes she could reinvent herself and finally tell her perfect boss, Drew Kingston, she has had a crush on him since high school. But she is just as tongue-tied and awkward around him now as she ever was, and long-familiar patterns are hard things from which to break free…

Ladies’ man Michael is a former bad boy looking for redemption. He is desperate to atone for past mistakes that he made with his family, but younger brother Drew has cut him out of his life and refuses to even speak to him. Which means Michael needs help getting to Drew.

And so he approaches Shannon with a proposition: If she will get Drew to agree to hear him out, Michael will mentor Shannon in how to win his brother’s heart. Suspicious of Michael’s motives, Shannon initially enters into the bargain just to make sure Michael isn’t actually in town to cause trouble for Drew, but the two unlikely allies are surprised to discover they enjoy each other’s company far more than either expected.

Shannon starts to realize that maybe love isn’t about reinventing yourself after all. It’s about finding your perfect match.
03

Love Lessons (Heavenly Bites Novella #2)
Self-assured Nadia Normandy knows everything there is to know about men and dating, which seems to be why little old Mrs. Beasley maneuvers her into taking unsuspecting and bookish accountant Benji Garner under her wing. Her mission? Shape him up for the opposite sex, preferably in time for New Year’s Eve.

A challenge? Sure, but Nadia discovers that Benji’s got a charm all his own, and she finds herself avoiding her usual social scene in favor of time spent with him—all in the name of mentoring him, of course.

Except that after a while, it starts to feel less like mentoring and more like something else—which could present a problem, because just as Nadia begins to realize she didn’t know quite as much about men as she thought, other women are starting to notice her unlikely protégé.

(This novella is the 2nd in the Heavenly Bites series)
05

Coming Home
No woman ever really forgets her first love. Callie Sorenson is no exception. Hers was tall, tanned, and—as her older brother’s best friend—completely off limits.

It’s a name that Callie hasn’t spoken in years, even if the man to whom it belongs has never really been all that far from her thoughts. Or her heart. But now a twist of fate will bring her back to the childhood home she left behind years ago, and to the hometown boy for whom she secretly longed.

When her mother takes a bad fall and breaks her hip, Callie leaves the bright lights of New York City to fly back west and help with the rehabilitation. It’s a tense homecoming due to a long time estrangement between mother and daughter, and it drives Callie to confront both a painful personal loss and her unanswered questions about the father who abandoned her when she was just a child.

It also brings her face to face with Danny again, and Callie quickly realizes that old feelings die hard.

But for Danny, it’s new feelings that are a problem. Callie is not the young girl he remembers but a woman now, and a very desirable one. They both have reasons to fight the growing attraction between them, but the temptation may just prove to be too much to resist, despite some very real risk to their hearts. The past casts a long shadow over the future, though, and Callie will have to overcome it or else face losing the one man who means the most to her.
06

Playing Cupid (Heavenly Bites #3)
Much as she loves her meddling matchmaker of a grandmother, free-spirited Aimee Beasley is tired of dodging the dull and downright tiresome dates the older woman keeps trying to arrange for her. So when she notices her beloved Gran preening in the presence of a distinguished elderly gentleman who’s been visiting their apartment building, Aimee is delighted at the prospect of turning the tables on her.

But her plans to match her grandmother up with the gentleman in time for Valentine’s Day hit a snag when Aimee realizes he’s the uncle of their downstairs neighbor, a stodgy thirty-something history professor named Doyle with whom she butts heads on a regular basis. She’ll need to find a way to make nice and enlist his help, or her plan to see her long-widowed Gran happily matched again will never work.

For Gran’s sake, she’s determined to find a way. In the process, she starts to realize that her cranky downstairs neighbor has a softer side she never suspected existed.

And when it comes to romantic heroes, history professors may not have gotten a fair shake…
07

All’s Fair In Love And Weddings
Prudence Collier spent the better part of her reckless youth proving that she was not aptly named, and unfortunately she burned a few bridges in the process, including where her family is concerned. So when her long-estranged sister invites her to her destination wedding in the Virgin Islands, Prue leaps at the chance to mend at least one broken family relationship and prove that she’s a changed person.

Tucker Davies, on the other hand, has come to the islands for a very different reason: to stop the wedding. As a childhood friend of the groom, he has reason to believe that his friend is about to make a huge mistake and is intent on not letting that happen. One thing he didn’t count on, though, was going up against Prue.

Determined to make up for the past, Prue resolves to keep Tucker from interfering with her sister’s happiness in the present and is willing to go to any lengths necessary to do so. Any. And if that requires a few tiny deceptions here and there, the occasional brush with the local authorities, and perhaps even instigating a barroom brawl, so be it. A sister has to do what a sister has to do.

But so does a friend, and Tucker has no intention of backing down, no matter how aggravating or even—to his surprise—appealing Prudence Collier can be.

The war is on, and neither side believes they can afford to surrender.

Which is a shame, because they’re both beginning to suspect surrendering would be a lot of fun…
08

It Happened One Night
Who has time for dating these days? Certainly not struggling entrepreneur Paisley Jameson, who has way too much on her plate to pay any real attention to her shriveling social life. And not mechanic Joe Spencer either, who has a lot on his mind with both the family business and family in general. But neither can say no to the beloved mutual acquaintance who wants to set them both up on a blind date.

Which is too bad, because they both kind of wish they had said no when they show up for the dinner date and realize they've met before--and not under happy circumstances.

But fate seems determined to prove that they're not so wrong for each other after all, because in spite of the intentions of both Paisley and Joe to nip this whole unfortunate blind date thing in the bud and go their separate ways, events transpire to keep them together for an evening involving muggers, foot-chases, and even a high-speed trip to the ER--

And that's all before dessert.

Winging It
Up until now, straitlaced Simon Kirkendale has done an admirable job of keeping his high society mother’s demands for grandbabies at bay, but lately she’s kicked things into high gear. So he isn’t too disappointed to delay her latest matchmaking attempt when a pretty stranger hops into the backseat of his car en route to one of his mother’s dinner parties and tells him to drive. A car-jacking? Nope. More like a bird on the run, but this particular bird happens to be a parrot who has slipped its cage, and Simon’s new acquaintance desperately needs to get it back before she loses sight of it altogether.

Ever the nice guy—and okay, maybe also a little intrigued by the colorful Miss Juleen Pruitt’s sudden appearance in his car—Simon hits the gas pedal and obliges only to find himself unwittingly dragged into a wild goose chase around town for a bird who seems to be determined to either get itself killed or the two people trying to catch it. Simon’s money is on the latter.

But it turns out that a little disruption and chaos in his life might just be what Simon needs most—especially if it comes in the form of Juleen.

If he can just manage to survive meeting her…