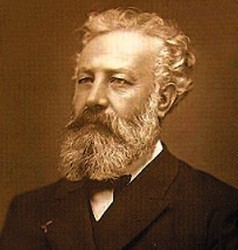 Jules Gabriel Verne was a French author who pioneered the genre of science-fiction. He is best known for his novels Journey to the Center of the Earth (1864), Twenty Thousand Leagues Under the Sea (1870), and Around the World in Eighty Days (1873).

Verne wrote about space, air, and underwater travel before navigable aircraft and practical submarines were invented, and before any means of space travel had been devised. He is the third most translated author of all time, behind Disney Productions and Agatha Christie. His prominent novels have been made into films. Verne, along with H. G. Wells, is often referred to as the "Father of Science Fiction".

Twenty Thousand Leagues Under the Sea (Extraordinary Voyages, #6)
When an unidentified “monster” threatens international shipping, French oceanographer Pierre Aronnax and his unflappable assistant Conseil join an expedition organized by the US Navy to hunt down and destroy the menace. After months of fruitless searching, they finally grapple with their quarry, but Aronnax, Conseil, and the brash Canadian harpooner Ned Land are thrown overboard in the attack, only to find that the “monster” is actually a futuristic submarine, the Nautilus, commanded by a shadowy, mystical, preternaturally imposing man who calls himself Captain Nemo. Thus begins a journey of 20,000 leagues—nearly 50,000 miles—that will take Captain Nemo, his crew, and these three adventurers on a journey of discovery through undersea forests, coral graveyards, miles-deep trenches, and even the sunken ruins of Atlantis. Jules Verne’s novel of undersea exploration has been captivating readers ever since its first publication in 1870, and Frederick Paul Walter’s reader-friendly, scientifically meticulous translation of this visionary science fiction classic is complete and unabridged down to the smallest substantive detail.
02

Around the World in Eighty Days (Extraordinary Voyages, #11)
One night in the reform club, Phileas Fogg bets his companions that he can travel across the globe in just eighty days. Breaking the well-established routine of his daily life, he immediately sets off for Dover with his astonished valet Passepartout. Passing through exotic lands and dangerous locations, they seize whatever transportation is at hand—whether train or elephant—overcoming set-backs and always racing against the clock.
03

Journey to the Center of the Earth (Extraordinary Voyages, #3)
04

The Mysterious Island (Extraordinary Voyages, #12)
After hijacking a balloon from a Confederate camp, a band of five northern prisoners escapes the American Civil War. Seven thousand miles later, they drop from the clouds onto an uncharted volcanic island in the Pacific. Through teamwork, scientific knowledge, engineering, and perseverance, they endeavour to build a colony from scratch. But this island of abundant resources has its secrets. The castaways discover they are not alone. A shadowy, yet familiar, agent of their unfathomable fate is watching.

What unfolds in Jules Verne’s imaginative marvel is both an enthralling mystery and the ultimate in survivalist adventures.
05

From the Earth to the Moon (Extraordinary Voyages, #4)
Verne's 1865 tale of a trip to the moon is (as you'd expect from Verne) great fun, even if bits of it now seem, in retrospect, a little strange. Our rocket ship gets shot out of a cannon? To the moon? Goodness! But in other ways it's full of eerie bits of business that turned out to be very near reality: he had the cost, when you adjust for inflation, almost exactly right. There are other similarities, too. Verne's cannon was named the Columbiad; the Apollo 11 command module was named Columbia. Apollo 11 had a three-person crew, just as Verne's did; and both blasted off from the American state of Florida. Even the return to earth happened in more-or-less the same place. Coincidence -- or fact!? We say you'll have to read this story yourself to judge.
06

Five Weeks in a Balloon (Extraordinary Voyages, #1)
There was a large audience assembled on the 14th of January, 1862, at the session of the Royal Geographical Society, No. 3 Waterloo Place, London. The president, Sir Francis M -, made an important communication to his colleagues, in an address that was frequently interrupted by applause. This rare specimen of eloquence terminated with the following sonorous phrases bubbling over with patriotism: "England has always marched at the head of nations" (for, the reader will observe, the nations always march at the head of each other), "by the intrepidity of her explorers in the line of geographical discovery." (General assent). "Dr. Samuel Ferguson, one of her most glorious sons, will not reflect discredit on his origin." ("No, indeed!" from all parts of the hall.)
07

In Search of the Castaways; or the Children of Captain Grant (Extraordinary Voyages, #5)
ALL that could be discovered, however, on these pieces of paper was a few words here and there, the remainder of the lines being almost completely obliterated by the action of the water. Lord Glenarvan examined them attentively for a few minutes, turning them over on all sides, holding them up to the light, and trying to decipher the least scrap of writing, while the others looked on with anxious eyes.
08

20,000 Leagues Under the Sea and other Classic Novels
Writing in France in the nineteenth century, Jules Verne captured his era's fascination with adventure and exploration in a series of novels he referred to as his Voyages extraordinaries. This book collects six of Verne's best-known novels that extrapolate developing technology and scientific inquisitiveness into rousing adventures.

Five weeks in a balloon --
Journey to the center of the earth --
From the earth to the moon --
Round the moon --
Twenty thousand leagues under the sea --
Around the world in eighty days.
09