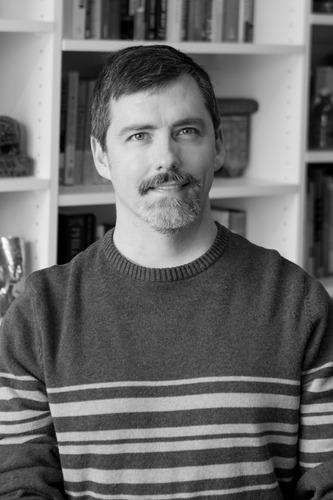 John David Anderson once hit himself so hard on a dare by his sister that he literally knocked himself out of a chair and nearly blacked out. He has since translated this passion and singularity of purpose to the related arts of novel writing and pizza eating. The author of STANDARD HERO BEHAVIOR, SIDEKICKED, MINION, THE DUNGEONEERS and the soon-to-land MS. BIXBY's LAST DAY, Anderson is a firm believer in wearing the same pair of jeans for three days in a row (four in the winter) and the power of writing to solve 73% of the world's problems. He lives with his beautiful wife and twins in Indianapolis, Indiana.

Ms. Bixby's Last Day
Everyone knows there are different kinds of teachers. The good ones. The not-so-good ones. The boring ones, the mean ones, the ones who try too hard. The ones you’ll never remember, and the ones you want to forget. But Ms. Bixby is none of these. She’s the sort of teacher who makes you feel like the indignity of school is worthwhile. Who makes the idea of growing up less terrifying. Who you never want to disappoint. What Ms. Bixby is, is one of a kind.

Topher, Brand, and Steve know this better than anyone. And so when Ms. Bixby unexpectedly announces that she is very sick and won’t be able to finish the school year, they come up with a plan. Through the three very different stories they tell, we begin to understand just what Ms. Bixby means to Topher, Brand, and Steve—and what they are willing to go to such great lengths to tell her.

John David Anderson, the acclaimed author of Sidekicked, returns with a story of three kids, a very special teacher, and one day that none of them will ever forget.
02

Posted
In middle school, words aren’t just words. They can be weapons. They can be gifts. The right words can win you friends or make you enemies. They can come back to haunt you. Sometimes they can change things forever.

When cell phones are banned at Branton Middle School, Frost and his friends Deedee, Wolf, and Bench come up with a new way to communicate: leaving sticky notes for each other all around the school. It catches on, and soon all the kids in school are leaving notes—though for every kind and friendly one, there is a cutting and cruel one as well.

In the middle of this, a new girl named Rose arrives at school and sits at Frost’s lunch table. Rose is not like anyone else at Branton Middle School, and it’s clear that the close circle of friends Frost has made for himself won’t easily hold another. As the sticky-note war escalates, and the pressure to choose sides mounts, Frost soon realizes that after this year, nothing will ever be the same.
03

Sidekicked (Sidekicked, #1)
With not nearly enough power comes way too much responsibility.

Andrew Bean might be a part of H.E.R.O., a secret organization for the training of superhero sidekicks, but that doesn’t mean that life is all leaping tall buildings in single bounds. First, there’s Drew’s power: Possessed of super senses – his hearing, sight, taste, touch, and smell are the most powerful on the planet – he’s literally the most sensitive kid in school. There’s his superhero mentor, a former legend who now spends more time straddling barstools than he does fighting crime. And then there’s his best friend, Jenna – their friendship would be complicated enough if she weren’t able to throw a Volkswagen the length of a city block. Add in trying to keep his sidekick life a secret from everyone, including his parents, and the truth is clear: Middle school is a drag even with superpowers.

But this was all before a supervillain long thought dead returned to Justicia, superheroes began disappearing at an alarming rate, and Drew’s two identities threatened to crash head-on into each other. Drew has always found it pretty easy to separate right from wrong, good from evil. It’s what a superhero does. But what happens when that line starts to break down?
04

Granted
From the author of beloved novels Ms. Bixby’s Last Day and Posted comes a hilarious, heartfelt, and unforgettable novel about a fairy-in-training.

Everyone who wishes upon a star, or a candle, or a penny thrown into a fountain knows that you’re not allowed to tell anyone what you’ve wished for. But even so, there is someone out there who hears it.

In a magical land called the Haven lives a young fairy named Ophelia Delphinium Fidgets. Ophela is no ordinary fairy—she is a Granter: one of the select fairies whose job it is to venture out into the world and grant the wishes of unsuspecting humans every day.

It’s the work of the Granters that generates the magic that allows the fairies to do what they do, and to keep the Haven hidden and safe. But with worldwide magic levels at an all-time low, this is not as easy as it sounds. On a typical day, only a small fraction of the millions of potential wishes gets granted.

Today, however, is anything but typical. Because today, Ophelia is going to get her very first wish-granting assignment.

And she’s about to discover that figuring out how to truly give someone what they want takes much more than a handful of fairy dust.
05

Minion (Sidekicked, #2)
John David Anderson returns to the world he created in Sidekicked with an entirely new cast of characters-this time the villains-in a funny and emotional companion to his first breakout tween novel.

Michael Morn might be a villain, but he's really not a bad guy. When you live in New Liberty, known across the country as the City without a Super, there are only two kinds of people, after all: those who turn to crime and those who suffer. Michael and his adoptive father spend their days building boxes-special devices with mysterious abilities that they sell to the mob at a price. They provide for each other, they look out for each other, and they'd never betray each other. In New Liberty, a city torn apart by the divide between the rich and the poor, the moral and the immoral, this is as much of a family as anyone could ever hope for.

But then a Super comes to town, a mysterious blue streak in the sky known only as the Comet, and Michael's world is thrown into disarray. The Comet could destroy everything Michael and his dad have built, the safe and secure life they've made for themselves in a city where safety and security are scarce. And now Michael and his father face a choice: to hold tight to their life, or to let it unravel.

John David Anderson, author of the acclaimed Sidekicked, has written another story set in an America where superheroes and supervillains are commonplace, but where the line between right and wrong, good and evil, is still not any less elusive.
06

Finding Orion
Rion Kwirk comes from a rather odd family. His mother named him and his sisters after her favorite constellations, and his father makes funky-flavored jelly beans for a living. One sister acts as if she’s always onstage and the other is a walking dictionary. But no one in the family is more odd than Rion’s grandfather, Papa Kwirk. He’s the kind of guy who shows up on his motorcycle only on holidays, handing out crossbows and stuffed squirrels as presents. Rion has always been fascinated by Papa Kwirk, especially since his son—Rion’s father—is the complete opposite. Where Dad is predictable, nerdy, and reassuringly boring, Papa Kwirk is mysterious, dangerous, and cool.

Which is why, when Rion and his family learn of Papa Kwirk’s death and pile into the car to attend his funeral and pay their respects, Rion can’t help but feel that that’s not the end of his story. That there’s so much more to Papa Kwirk to discover.

The Dungeoneers (Dungeoneers, #1)
The Dungeoneers is an action-packed, funny, and heartbreaking middle grade fantasy-adventure from the author of the acclaimed Sidekicked and Minion, John David Anderson.

The world is not a fair place, and Colm Candorly knows it. While his parents and eight sisters seem content living on a lowly cobbler's earnings, Colm can't help but feel that everyone has the right to a more comfortable life. It's just a question of how far you're willing to go to get it.

In an effort to help make ends meet, Colm uses his natural gift for pickpocketing to pilfer a pile of gold from the richer residents of town, but his actions place him at the mercy of a mysterious man named Finn Argos, a gilded-toothed, smooth-tongued rogue who gives Colm a choice: he can be punished for his thievery, or he can become a member of Thwodin's Legions, a guild of dungeoneers who take what they want and live as they will. Colm soon finds himself part of a family of warriors, mages, and hunters, learning to work together in a quest to survive and, perhaps, to find a bit of treasure along the way.
08

Insert Coin to Continue
Bryan Biggins wakes up to find that his life has become a video game.

Meet Bryan Biggins. Most of the time he’s a freckle-faced boy, small for his age, who attends a school known for its unwritten uniform of North Face jackets and Hollister jeans. The rest of the time he is Kieran Nightstalker, the level-fifty dark-elf hero of his favorite video game, Sovereign of Darkness.

Until one day Bryan wakes up to find out his life has become a video game. Sort of. Except instead of fighting dragons or blasting bad guys, he’s still doing geometry and getting picked last for dodgeball. It’s still middle school. Only now there’s much more at stake.

Stealing the Twinkie from underneath the noses of those dieting teachers isn’t enough to earn him another life. And battling the creature that escaped from the science lab doesn’t seem to cut it either. And who knew Romeo and Juliet would turn into a zombie bloodbath?!

All the while he’s losing hit points and gaining levels, and facing the truth that GAME OVER might flash before his eyes at any minute. It all seems to be building to something…something that has been haunting Bryan since way before his life turned into an X-Box nightmare, a challenge that only he can face. Will Bryan find a way to beat the game before it’s too late?
09

Standard Hero Behavior
Mason Quayle is a bard living in a town whose heroes have long since fled. No heroes = no adventurous tales and nothing for a bard to write about. So when the opportunity arises for Mason to go on a real-life quest--a chance to be a hero himself--he takes it. Following in the footsteps of his long-vanished hero father, Mason and his best friend, Cowel, set out on a journey full of misadventure and run-ins with an unusual cast of characters, among them, a retired hero-cum-shoe-salesman, a somnambulist sword fighter, a swarm of unfriendly (and deadly) pixies, a wholesome young witch, and a werewolf hit man. They also stumble upon the answers to the questions that have haunted Mason for the past 10 years: Where is his father? Why didn't he return to his family? Was he really a hero?
10