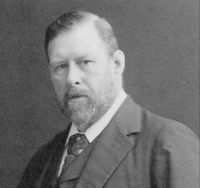 He was born Abraham Stoker in 1847 at 15 Marino Crescent – then as now called "The Crescent" – in Fairview, a coastal suburb of Dublin, Ireland. His parents were Abraham Stoker and the feminist Charlotte Mathilda Blake Thornely. Stoker was the third of seven children. Abraham and Charlotte were members of the Clontarf Church of Ireland parish and attended the parish church (St. John the Baptist located on Seafield Road West) with their children, who were both baptised there.

Stoker was an invalid until he started school at the age of seven — when he made a complete and astounding recovery. Of this time, Stoker wrote, "I was naturally thoughtful, and the leisure of long illness gave opportunity for many thoughts which were fruitful according to their kind in later years."

After his recovery, he became a normal young man, even excelling as an athlete (he was named University Athlete) at Trinity College, Dublin (1864 – 70), from which he graduated with honours in mathematics. He was auditor of the College Historical Society and president of the University Philosophical Society, where his first paper was on "Sensationalism in Fiction and Society".

In 1876, while employed as a civil servant in Dublin, Stoker wrote a non-fiction book (The Duties of Clerks of Petty Sessions in Ireland, published 1879) and theatre reviews for The Dublin Mail, a newspaper partly owned by fellow horror writer J. Sheridan Le Fanu. His interest in theatre led to a lifelong friendship with the English actor Henry Irving. He also wrote stories, and in 1872 "The Crystal Cup" was published by the London Society, followed by "The Chain of Destiny" in four parts in The Shamrock.

In 1878 Stoker married Florence Balcombe, a celebrated beauty whose former suitor was Oscar Wilde. The couple moved to London, where Stoker became business manager (at first as acting-manager) of Irving's Lyceum Theatre, a post he held for 27 years. The collaboration with Irving was very important for Stoker and through him he became involved in London's high society, where he met, among other notables, James McNeil Whistler, and Sir Arthur Conan Doyle. In the course of Irving's tours, Stoker got the chance to travel around the world.

Bram Stoker died in 1912, and was cremated and his ashes placed in a display urn at Golders Green Crematorium. After Irving Noel Stoker's death in 1961, his ashes were added to that urn. The original plan had been to keep his parents' ashes together, but after Florence Stoker's death her ashes were scattered at the Gardens of Rest.
See also http://en.wikipedia.org/wiki/Bram_Stoker

Bram Stoker is the author of books: Dracula, Dracula's Guest, Dracula's Guest and Other Weird Stories, Dracula and Other Horror Stories, Lair of the White Worm, The Jewel of Seven Stars, The Judge's House, Dracula 1, Classics of Horror: Dracula & Frankenstein, The Lady of the Shroud

Dracula
You can find an alternative cover edition for this ISBN here and here.

A rich selection of background and source materials is provided in three areas: Contexts includes probable inspirations for Dracula in the earlier works of James Malcolm Rymer and Emily Gerard. Also included are a discussion of Stoker's working notes for the novel and "Dracula's Guest," the original opening chapter to Dracula. Reviews and Reactions reprints five early reviews of the novel. "Dramatic and Film Variations" focuses on theater and film adaptations of Dracula, two indications of the novel's unwavering appeal. David J. Skal, Gregory A. Waller, and Nina Auerbach offer their varied perspectives. Checklists of both dramatic and film adaptations are included.

A Chronology and a Selected Bibliography are included.
02

Dracula's Guest
A passage from the manuscript of Dracula.
03

Dracula's Guest and Other Weird Stories
Menacing tales from one of the masters of horror fiction
Although Bram Stoker is best known for his world-famous novel Dracula, he also wrote many shorter works on the strange and the macabre. Comprised of spine-chilling tales published by Stoker’s widow after his death, as well as The Lair of the White Worm, an intensely intriguing novel of myths, legends, and unspeakable evils, this collection demonstrates the full range of Stoker’s horror writing.

For more than seventy years, Penguin has been the leading publisher of classic literature in the English-speaking world. With more than 1,700 titles, Penguin Classics represents a global bookshelf of the best works throughout history and across genres and disciplines. Readers trust the series to provide authoritative texts enhanced by introductions and notes by distinguished scholars and contemporary authors, as well as up-to-date translations by award-winning translators.
04

Dracula and Other Horror Stories
Dracula and Other Horror Classics collects the most memorable tales of horror by Bram Stoker. In addition to Dracula--the landmark vampire novel that set the pattern for virtually all vampire fiction written after its publication in 1897--this omnibus collects the novels The Jewel of Seven Stars and The Lair of the White Worm. In also includes a dozen of Stoker's short tales of the macabre, including "Dracula's Guest," a sidebar to his famous novel.

For more than a century, Bram Stoker's fiction has inspired countless writers of horror and fantasy fiction. This volume allows readers a unique opportunity to appreciate the full range of his dark imagination.

Dracua and Other Horror Classics is one of Barnes & Noble's leatherbound classic editions. Each volume features authoritative texts by the world's greatest authors, in exquisitely designed bonded-leather bindings with distinctive gilt edging and an attractive silk-ribbon bookmark. Decorative, durable, and collectible, these books offer hours of pleasure to readers young and old and are an indispensible cornerstone for every home library.
05

Lair of the White Worm
In a tale of ancient evil, Bram Stoker creates a world of lurking horrors and bizarre denizens: a demented mesmerist, hellbent on mentally crushing the girl he loves; a gigantic kite raised to rid the land of an unnatural infestation of birds, and which receives strange commands along its string; and all the while, the great white worm slithers below, seeking its next victim...

Bram Stoker, creator of Dracula, is one of the most enduring and masterful influences on the literature of terror.
06

The Jewel of Seven Stars
An Egyptologist, attempting to raise from the dead the mummy of Tera, an ancient Egyptian queen, finds a fabulous gem and is stricken senseless by an unknown force. Amid bloody and eerie scenes, his daughter is possessed by Tera's soul, and her fate depends upon bringing Tera's mummified body to life.
07

The Judge's House
A scholar takes up residence in the former home of a judge with a very evil reputation. He finds the place infested with rats, but it suits his purposes... until one of the rats grows too bold, and the scholar realizes the horror he's stumbled into.
08

Classics of Horror: Dracula & Frankenstein
DRACULA is an 1897 epistolary novel by Irish author Bram Stoker, featuring as its primary antagonist the vampire Count Dracula. It was 1st published as a hardcover in 1897 by Archibald Constable & Co. Dracula has been assigned to many literary genres including vampire literature, horror fiction, the gothic novel & invasion literature. Structurally it's an epistolary novel, told as a series of letters, diary entries, ships' logs, etc. Literary critics have examined many themes in the novel, such as the role of women in Victorian culture, conventional & conservative sexuality, immigration, colonialism, folklore & postcolonialism. Altho Stoker didn't invent the vampire, the novel's influence on the popularity of vampires has been singularly responsible for many theatrical, film & tv interpretations since its publication.
FRANKENSTEIN or The Modern Prometheus is a novel about a failed artificial life experiment that's produced a monster, written by Mary Shelley. She started writing the story when she was 18. It was published when she was 21. The 1st edition was published anonymously in London in 1818. Shelley's name appears on the 2nd edition, published in France in 1823. She'd travelled the region in which the story takes place. The topics of galvanism & other similar occult ideas were themes of conversation among her companions, particularly her future husband Percy Bysshe Shelley. The storyline was taken from a dream. She was talking with three writer-colleagues, Percy Bysshe Shelley, Lord Byron & John Polidori. They decided they would have a competition to see who could write the best horror story. After thinking for weeks about what her storyline could be, she dreamt about a scientist who created life & was horrified by what he'd made. Then Frankenstein was written. Frankenstein is infused with some elements of the Gothic novel & the Romantic movement & is also considered to be an early example of sf. Brian Aldiss has argued it should be considered the 1st true sf story, because unlike in previous stories with fantastical elements resembling those of later sf, the central character "makes a deliberate decision" & "turns to modern experiments in the laboratory" to achieve fantastic results. The story is partially based on Giovanni Aldini's electrical experiments on dead & living animals & was also a warning against the expansion of modern man in the Industrial Revolution, alluded to in its subtitle, The Modern Prometheus. It's had a considerable influence across literature & popular culture & spawned a complete genre of horror stories & films.
10

The Lady of the Shroud
1909. Bram Stoker wrote numerous novels, short stories, essays, and lectures, but Dracula is by far his most famous work. Stoker coined the term undead, and his interpretation of vampire folklore continues to this day to shape the portrayals of legendary monsters. Contents: From The Journal of Occultism; The Will of Roger Melton; Vissarion; The Coming of the Lady; Under the Flagstaff; A Ritual at Midnight; The Pursuit in the Forest; The Empire of the Air; The Flashing of the Handjar; and Balka. See other titles by this author available from Kessinger Publishing.