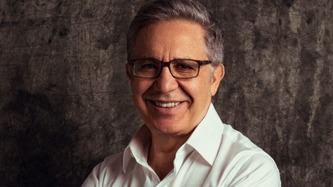 O.Z. Livaneli (in Turkish Zülfü Livaneli) born in 1946, is a singer, a composer, a bestselling Turkish author and a poet who is considered one of the most significant and influential authors and intellectuals of his time. His books have won numerous literary awards, both in his home country and abroad.

Although his novels are viewed as highly literary, Livaneli is considered the best selling contemporary author of Turkey today. The article A Festival of Musical Contrasts, which appeared in the International New York Times (9.7.2014) refers to Zuflu Livaneli as a composer.

Livaneli is known for his novels that interweave diverse social and historical backgrounds, figures, and incidents, such as in ‘Bliss’ which won the Barnes & Noble's ‘Discovery of Great New Writers Award’ in 2006, and in his critically acclaimed ‘Serenade for Nadia’, ‘Leyla's House’, and ‘My Brother's Story’, which were all translated into 37 languages and won numerous Turkish and International literary awards, and were highly praised by prominent literary critics around the world. His novels have been turned into theatrical movies, stage plays, and operas.

Livaneli was imprisoned several times during the 1971 Turkish coup d'état because of his political views and had to leave Turkey in 1972 and went on exile. He lived in Stockholm, Paris, Athens, and New York where he met and collaborated with artists and intellectuals such as Elia Kazan, Arthur Miller, James Baldwin, and Peter Ustinov among others. Livaneli returned to Turkey in 1984.

His works and cultural and political activities and contributions to world peace were recognized by UNESCO in 1995 when he was appointed Goodwill Ambassador to UNESCO -- a post he still holds today. He served a term in the Turkish Parliament as well as in the Council of Europe.

Livaneli is as accomplished as a writer as he is as a poet and a songwriter, cultural and political activist. Although he first became known for his contemporary music, Livaneli turned his focus to writing, in the last decades, when he realized that literature was closer to his heart. His first collection of short stories, 'A Child in Purgatory', published in 1978 was turned into a movie by Swedish and German TV.He is also a prominent social-democrat politician and was a member of the Turkish parliament for one term. Livaneli's novels have been turned into theatrical movies, stage plays, and operas.

Livaneli is known for his contemporary music, in much the same way as Bob Dylan and his contemporaries in the United States were in the 60's. His 1997 Ankara concert was attended by no less than 500 thousand people. His collaborations with Mikis Theodorakis of Greece have been noted as a gesture of bringing together the two countries. Livaneli has been a UNESCO Goodwill Ambassador since 1996.

Livaneli has composed some three hundred songs, a rhapsody recorded by London Symphony Orchestra–, and a ballet. His compositions have reached cult status nationwide and have been performed by internationally renowned artists such as Joan Baez, Maria Farantouri, María del Mar Bonet, Udo Lindenberg, Haris Alexiou, Jocelyn B. Smith, and Kate Westbrook. He has also written five plays and thirty film soundtracks. Among these soundtracks are the soundtrack for "Yol" (The Path), directed by Yilmaz Güney and winner of the Golden Palm in Cannes Film Festival, "The Herd", directed by Yılmaz Güney and Zeki Ökten, and "Shirin's Wedding" by German director Helma Sanders-Brahms. His recordings have been published in the USA, Sweden, Germany, Holland and France, and he has given dozens of concerts throughout the world. He has produced albums and performed with Mikis Theodorakis and Maria Farantouri, and he has also collaborated with Manos Hatzidakis, Giora Feidman, Inti-Illimani and Ángel Parra. In 2010, he sang 'Mothers of The Disappeared' with Bono at U2's concert in Istanbul, Turkey, which was U2's first-ever concert in Istanbul. Liv

Bliss
Fifteen-year-old Meryem lives in a rural village in Eastern Anatolia, Turkey. Her simple, conventional way of life changes dramatically after her uncle, a sheikh in a dervish order, rapes her--and condemns her to death for shaming the family. Asked to carry out the "honor killing" is his son Cemal, a commando in the Turkish army.

So begins a long, mystifying voyage for Meryem as her shell-shocked cousin ushers her to the shining metropolis of Istanbul where another troubled soul, the Harvard-educated professor Irfan, embarks on his own journey of transformation--one that catapults him into the heart of Meryem and Cemal's conflict.

The crossed-paths and interwoven destinies of these three characters makes for an affecting, by turns brutal and life-affirming portrayal of traditional and modern-day Turkey that no reader will soon forget.
08