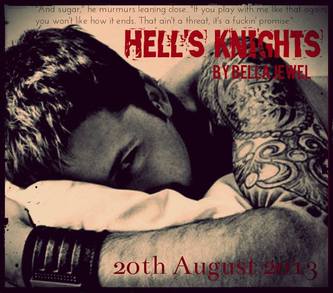 Heya!! My name is Bella, I'm a new aussie author and I am as crazy as they come. I'm playful, friendly and always up for a chat so stop on by x

Addison has had a hard life. Her mother is useless, and her father hasn't been in her life for years. When her mother dies, she's left with no money and an angry man after her. She goes to the only person she knows can take care of her right now - her father. She knows her father is the President of an MC club, but she doesn't quite realize just how much she will come to rely on that club.

Cade is everything she knows she should stay away from, and yet she can't seem to keep herself from wanting him. He's the club VP, gorgeous, rugged, charming and he makes her feel again. She should be running, she should be escaping the demons of her past, but instead she finds herself falling for the gorgeous biker.

Come on this whirlwind romance with two broken people, who figure out how to put each other back together.
02

Spike knows tragedy, he knows that feelings are better left hidden. He refuses to put his heart out there again, it's a pain he's not willing to feel a second time around. He's accepted he's going to spend forever alone. That's all he deserves.

But then there's Ciara, the sister of his deceased wife. She's beautiful and damned determined to throw herself into his life in hopes they can reform an old friendship, but Spike won't hear of it, and Ciara refuses to give up.

Who will win the battle of wills?
03

Knights' Sinner (The MC Sinners, #3)
Jackson is always considered the 'softie'. He's the first to help people out when they're in need. He's President of the Hell's Knights and he figures it's about time he shows the world how much of a sinner he can be.

Serenity has a dark past. Secrets haunt her and she has no way of escaping them. Hogan is the only family she knows and life with him is brutal. And it's about to get worse.

He sends her on a mission.

On a mission to destroy the Hell's Knights and the Heaven's Sinners.

Can she pretend with a club she doesn't know?

Or will she betray Hogan for the man she's falling in love with?
04

'Til Death: Volume One ('Til Death, #1)
They say there's a fine line between love and hate.

I married a douchebag.

I didn't know it at the time.

He came in like a handsome stranger and blew me off my feet.

I fell madly in love, like the naive girl I am.

Then he left me high and dry.

Turns out, I was nothing more than a business plan for billionaire playboy, Marcus Tandem.

He needed to be married in order to obtain his grandfathers business, and I was the poor victim in his path.

I believed in what we had, until the truth reared its ugly head.

I never meant anything to Marcus. Not a damned thing.

With my world spinning on its axis, the girl I once was has long since died.

Instead he left me as this empty, emotionless shell.

I may have made a vow before God to love and cherish him ‘Til Death do we part, but it’s time for me to give back to Marcus, exactly what he gave me.

He has to pay.

And pay he will.

Ash is a prison guard, she's tough, she's strong and she never backs away from a fight. She takes her job seriously, she takes her training seriously, and everything in her life goes as planned.

Until the day he is brought into the prison.

She'll never forget meeting Beau 'Krypt' Dawson for the first time. She'll never forget his haunted eyes and his numb expression. He's a member of the Jokers Wrath MC and it is said he killed an innocent family in the middle of a cafe, in cold blood.

Deranged. Crazy. Psychotic.
All those words describe the infamous Krypt, but Ash suspects there's far more to the quiet man than meets the eye. Secrets are being hidden by the club, information is being kept under wraps. Krypt is silent for a reason.

Ash is desperate to know that reason.

Continually fighting, Krypt is transferred to a high security prison. Ash is in charge. She's always prepared, always alert. Not even her skills will stop the club from ambushing them and taking back Krypt. Only Ash ends up right in the middle of it.
They take her, too.

Now she's stuck with a Motorcycle Club who are tougher than any prisoner she's ever laid eyes on. And they won't let her go. She's too much of a risk. Until the situation can be sorted, they send her and Krypt into the mountains together....alone.
An epic, dangerous love will be built on the foundations of darkness.
06

Anguish (Jokers' Wrath MC, #3)
There are a lot of things in this world that are easy to escape from. Having a son you didn't ask for isn't one of them.

Mack is a nomad. He likes his own space and he struggles with emotion. His past is grey and his future looks about the same. That is until his ex-girlfriend dies and his son is handed over to him. A two month old baby he didn't know existed. Until now.

His world comes crashing down around him.

Desperate, he hires a nanny.

Jaylah has gotten herself into some serious trouble, so when she sees the job opening for a nanny pop up, she jumps on it. Of course she's not a nanny, but she figures she can pull it off. I mean, how hard can it be?

She's thrown into a world of diapers, hourly feedings and a whole lot of laundry. She's also introduced to the most rugged, gorgeous man she's ever had the pleasure of meeting.

The worst part, he's a biker.

Their sexual tension is huge, but he's a hard nut to crack. She'll get in, though. She makes it her mission to break through the wall Mack has built so high around himself.

Her world is about to spiral out of control, and she's taking Mack along for the ride.
07

*This is a two part series, both parts are now available. This is the second part**

You know how it went for me.
You know what he did.
You know the fire he left inside my soul when he crushed me into a thousand tiny pieces.
Since Marcus, my life has been a blur of emptiness.
Since Marcus there has been nothing.
I’m alone, my Mom is dwindling and I feel nothing but emptiness. I work long, I work hard, but why? There’s no longer anything to fight for.
I know I have to face him. I know I have to go back. To fix my life, I have to break my ties to him.
Seeing Marcus again will destroy me, but it’s time to finish this.
I don’t expect the bitter, twisted emotions I’ll feel when I see him again, and when I lose everything once more, because of him, the only thing on my mind is revenge.
But how do you hurt someone you still love so deeply?
How can I still care for a monster? How can he still make me feel?
Our story is the most complicated of them all, it’s far from beautiful, it’s far from perfect, it’s just a twisted mess of emotion that neither of us knows how to fix.
But we will fix it. You’ll see.

Melancholy (Jokers' Wrath MC, #2)
"There's never been a time I've cared about anything more than my club. Today that all changed. Today I got you."

No one’s story is ever truly their own.

I tried to create my own story, my own path, and my own actions. I’ve seen things people only see in their worst nightmares, but I never let it beat me down. I never let it become who I was. I picked myself up, and I kept going. Everything was what it was.

There was no point analyzing what it could be.

Until Maddox came into the picture. He saved my life. He changed my world; giving me the second chance some of us only dream about. There was only one thing missing in my second chance, and she was the reason I fought so hard to survive.

My sister who is supposed to be dead, well, at least, that’s what I thought.

That’s what he told me.

Now is where my story changes, but to understand this story, you have to start at the beginning…where it all began…and before.

This story is the second book in a series. You can get the first book on all major retailers. (Precarious - Jokers' Wrath MC Book 1)

This contains no cliffhanger and has a HEA. 18+
09

Angels in Leather (Rebels on Bikes, #1)
A girl on the run.

Her father gave her one task before he died. To deliver a package.
Now she has the baddest biker in the state after her.

He wants what she's got.

Secrets in both the past and the present threaten to destroy what she is working so hard for.

He threatens to ruin her heart.

Two worlds will collide to make something explosive.
10

Pandemonium (MC Sinners Next Generation, #1)
I am the good girl, the one who does no wrong.
Daughter to a ferocious and strong MC President, I know what protection feels like.
Until one night changes everything - and not a single person in the world can protect me from it, not even my dad.
Suffocating. Alone. Desperate.
I let my problems live deep inside until there is no longer anywhere to run.
I need an escape. Anything to make the pain go away.
Trouble comes for me, and I don't fight it.
I tried so hard to believe in what I was,
But nobody understood.
Not until him. Not until Lucas.
He sees me. He believes in me.
He refuses to let me drown.
He’s my way out. My escape.
But Lucas is forbidden. He’s a cop. I’m in danger. And my father is trying to protect what can’t be protected.
There can only be one outcome.
Pandemonium.