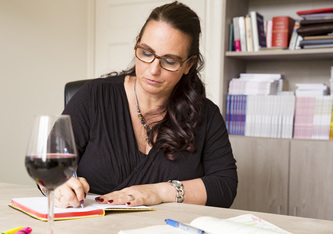 D.E. Haggerty is actually just plain old Dena, but she thinks using initials makes her sound sophisticated and maybe even grown up. She was born and raised in the U.S. but considers herself a Dutchie and not only because it sounds way cooler. After a stint in the U.S. Army, she escaped the US to join her husband in Holland. She fled Holland over ten years ago when she couldn’t stand the idea of being a lawyer for one single second more. Turns out Bed & Breakfast owner in Germany didn’t do it for her either. When the hubby got a job in Istanbul, she jumped ship and decided to give this whole writer thing a go. She’s now back in Holland, which she considers home. Sorry, Mom.

Fat Girl Begone!
I was expecting a ring not a 'see ya later'.

Well, you know what? Screw him! I don't need him.

What else don't I need? To drown my sorrows in tequila only to wake up to find I've planned (and paid for!) the diet-fitness-revenge-plan of the century. My best friend is ad-A-mant I not back out. Thank my lucky stars, I run into a group of crazy women at Zumba class who take me under their wing. Yippie! Things are looking up.

Of freaking course, that's when my work situation goes belly up. And then my life gets truly complicated. My ex decides he wants me back, my personal trainer asks me out, and my millionaire male buddy decides to throw his hat in the ring. Oh boy.
02

Molly's Misadventures
Yikes! Walking in on my husband getting it on with his secretary was definitely not on my agenda for the day.

Enter my best friend. Rebound sex is just what I need or at least that's what she thinks. Sneaky little brat even signs me up for internet dating.

Internet dating? Um, no thank you. My eyes are firmly fixed on Danny. The neighbor boy I've had a crush on since I was a dorky, braces-wearing, nose-buried-in-a-book teenager. Lucky me. He happens to be back living next door with his adorable daughter.

Before I know it, I find myself chasing my dream of being a writer with a brand-spanking new blog. Things are looking up. That is until my boss shows up and decides to give me an ultimatum - come back in four weeks or don't come back at all.

Gulp. Can I leave? And leave my dreams of being a writer behind? And what about Danny? Everyone knows long-distance relationships never work.
03

About Face (Love in the Suburbs, #1)
My grandma is trying to hook me up.

To be painfully specific, my seventy-five-year-old grandmother thinks a little hanky-panky would cheer me up. Direct quote. Since I’m currently living with her, I can’t escape the endless line of grandchildren of friends who keep ‘dropping by’ for dinner. Literally, I can’t escape. I can barely manage the trek to the dining room at this point.

But then I get a brilliant idea. I can fake date my physical therapist. Only he wants a real date. Gulp. A real date with me? Is he for real? I’m no longer the stylish girl with the glamorous job. Now, I’m a woman with a shattered leg and a scarred face.

If I’m going to learn to live with my new reality and give love a chance, my attitude needs to do an about face. Easier said than done.
04

Get all three books of the Gray-Haired Knitting Detectives series in one bundle! The bundle includes Murder, Mystery & Dating Mayhem, Jack Gets His Man, and Love in the Time of Murder. Join the Gray-Haired Knitting Detectives as they solve the murder of Izzy's grandma, figure out who is stealing money from Jack's store, and clear Dee of murder charges. But don't worry. Solving crimes won't prevent the knitters from matchmaking Izzy, Jack, and Dee.

Warning: The Gray-Haired Knitters are entirely too busy solving crimes and matchmaking to get any actual knitting done.
05

Searching for Gertrude
I'll come for you. No matter what. I'll find you, and we'll be reunited.

When Gertrude is forced to flee Nazi Germany with her family, Rudolf is left behind. Despite the distance, he remains devoted to her. Even after her letters stop.

Eight years pass before Rudolf is finally able to follow Gertrude to Istanbul. Their reunion should be inevitable, but Rudolf can't find Gertrude. He stumbles upon Rosalyn who immediately agrees to help him search for his lost love.

Willing to do anything in their search, they find themselves entangled with a British intelligence officer. As the danger increases and the search for Gertrude stretches on, Rudolf and Rosalyn grow close, but Rudolf gave his heart away long ago.

How far would you go to find the woman you love?

Murder, Mystery & Dating Mayhem (The Gray-Haired Knitting Detectives Book 1)
Did someone really kill Grandma or am I and my merry band of geriatric thieves imagining things?

The best thing my daredevil husband ever did was give me his grandma. Even after his death, I remained close to her. When she dies, I'm naturally devastated.

Grandma's knitting group of Jessica Fletcher wannabes are convinced Grandma's death wasn't natural. Something to do with knitting needle placement? No idea what they're talking about. The police think the old ladies are senile. I don't necessarily disagree, but I'm always up for a bit of excitement as long as it doesn't lead to a night in jail. Well, more than one night anyway.

But someone is not happy with our snooping around, which only spurs us on to snoop more. Things are starting to heat up in our little town.

Will we find Grandma's killer in time?
07

Never Trust a Skinny Cupcake Baker (Death by Cupcake #1)
A murder suspect? Her?

Callie's dreams are threatened when the police accuse her of murdering her pole dancing instructor. She didn't even want to take those stupid pole dancing classes!

No way is Callie letting anything get between her and her dream. Together with best baker bud Anna, she embarks on a journey to uncover the real killer.

Nothing is stopping them - not even a hot detective determined to keep Callie safe and make the cupcake baker his own.

Join us at Callie's Cakes where murder investigations are on the menu. Cupcakes not included.

Never Trust a Skinny Cupcake Baker is the first novel in the Death by Cupcake series but can be read as a standalone.
08

At Arm's Length (Love in the Suburbs, #2)
Jackson Schmidt is the biggest jerkity jerk ever. They should totally erect a statue to commemorate his jerkityness, jerkdom— Uggh! There are literally not enough words for ‘jerk’ to depict the man.

Unfortunately, Jackson is also the most gorgeous specimen of manhood I’ve ever laid eyes on. One look at him and I want to jump and climb him like a tree. But whenever he opens his mouth, his status as the biggest bastard on the planet is immediately reinstated. It’s impossible for the man to say anything remotely nice – at least not to me. To my best friend, though? To her, he’s Mr. Perfect Gentleman. Did I mention he’s carrying a torch for my engaged best friend?

My libido does not give one flying hoot Jackson is a dick who has a crush on my bestie. Nope. Not at all. No matter how much of a schmuck the man is – and trust me he takes schmuck to the next level – I continue to pant after him like a nerdy freshman crushing on the prom king. If I want to keep my sanity, I’m going to have to keep Jackson at arm’s length.

Jack Gets His Man (The Gray-Haired Knitting Detectives Book 2)
Will Jack catch a thief or find love?

Well, not totally awesome. His upcoming birthday is making him restless, and his ex is being a pain in his fabulous behind.

Until the hottie discovers things at Jack's store aren't as they seem. Someone is playing fast and loose with the finances.

The Gray-Haired Knitting Detectives jump in their geriatric shoes at the chance to help. They may even have time to find Jack's missing money in between re-enacting spy thrillers and setting Jack up on dates.

Will Jack catch a thief or find love?

Either way Jack's going to get his man.
10

I don’t care how much billionaire Roman Cadwell pushes (and, oh boy, does the sexy man push ALL my buttons), I am not dating him. Especially not when he’s wearing a golden band around his ring finger. I do not get involved with married men. Call it my line in the sand. If a man can’t be faithful, I want not one single thing to do with him.

But what if Roman isn’t really married? What then? No, no, no. I will not fall into Lying McLiarson’s trap.

Only every time the man touches me, my body forgets I’m a good girl and wants to give in. Hands off, Mr. Lying Pants, before I forget I’m a good girl.

Although – no one said I had to be a good girl forever.

Author’s Note: This romantic comedy contains absolutely, positively NO cheating. None. But it does have a whole bunch of witty dialogue and a super sweet happily ever after. And maybe more drama than the author originally intended. What can she say? The characters have minds of their own.

Hands Off is book 3 of the Love in the Suburbs series but can be read as a standalone.