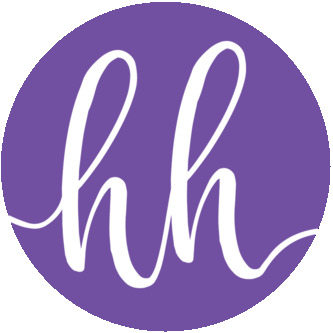 Helena Hunting is the author of The USA Today and NYT bestselling PUCKED Series. She lives on the outskirts of Toronto with her incredibly tolerant family and two moderately intolerant cats. She writes everything from romantic sports comedy to new adult angst.

Pucked (Pucked, #1)
With a famous NHL player for a stepbrother, Violet Hall is well acquainted with the playboy reputation of many a hockey star. So of course she isn't interested in legendary team captain Alex Waters or his pretty, beat-up face and rock-hard six-pack abs. But when Alex inadvertently obliterates Violet's misapprehension regarding the inferior intellect of hockey players, he becomes much more than just a hot body with the face to match. Suffering from a complete lapse in judgment, Violet discovers just how good Alex is with the hockey stick in his pants.

Violet believes her night of orgasmic magic with Alex is just that: one night. But Alex starts to call. And text. And email and send extravagant - and quirky - gifts. Suddenly he's too difficult to ignore and nearly impossible not to like. The problem is, the media portrays Alex as a total player, and Violet doesn't want to be part of the game.
02

Meet Cute
Talk about an embarrassing introduction. On her first day of law school, Kailyn ran quite literally into the actor she crushed on as a teenager, ending with him sprawled on top of her. Mortified to discover the Daxton Hughes was also a student in her class, her embarrassment over their meet-cute quickly turned into a friendship she never expected. Of course, she never saw his betrayal coming either...

Now, eight years later, Dax is in her office asking for legal advice. Despite her anger, Kailyn can't help feeling sorry for the devastated man who just became sole guardian to his thirteen-year-old sister. But when her boss gets wind of Kailyn's new celebrity client, there's even more at stake than Dax's custody issues: if she gets Dax to work at their firm, she'll be promoted to partner.

The more time Kailyn spends with Dax and his sister, the more she starts to feel like a family, and the more she realizes the chemistry they had all those years ago is as fresh as ever. But will they be able to forgive the mistakes of the past, or will one betrayal lead to another?
03

A Lie for a Lie (All In, #1)
From the New York Times bestselling author of the Pucked series comes a romantic comedy about instant attraction, second chances, and not-so-little white lies.

Sometimes I need an escape from the demands, the puck bunnies, and the notoriety that come with being an NHL team captain. I just want to be a normal guy for a few weeks. So when I leave Chicago for some peace and quiet, the last thing I expect is for a gorgeous woman to literally fall into my lap on a flight to Alaska. Even better, she has absolutely no idea who I am.

Lainey is the perfect escape from my life. My plan for seclusion becomes a monthlong sex fest punctuated with domestic bliss. But it ends just as abruptly as it began. When I’m called away on a family emergency, I realize too late that I have no way to contact Lainey.

A year later, a chance encounter throws Lainey and me together again. But I still have a lie hanging over my head, and Lainey’s keeping secrets of her own. With more than lust at stake, the truth may be our game changer.
04

Shacking Up (Shacking Up, #1)
Ruby Scott is months behind on rent and can’t seem to land a steady job. She has one chance to turn things around with a big audition. But instead of getting her big break, she gets sick as a dog and completely bombs it in the most humiliating fashion. All thanks to a mysterious, gorgeous guy who kissed—and then coughed on—her at a party the night before.

Luckily, her best friend might have found the perfect opportunity; a job staying at the lavish penthouse apartment of hotel magnate Bancroft Mills while he’s out of town, taking care of his exotic pets. But when the newly-evicted Ruby arrives to meet her new employer, it turns out Bane is the same guy who got her sick. Seeing his role in Ruby’s dilemma, Bane offers her a permanent job as his live-in pet sitter until she can get back on her feet.

Filled with hilariously awkward encounters and enough sexual tension to heat a New York City block, Shacking Up, from NYT and USA Today bestselling author Helena Hunting, is sure to keep you laughing and swooning all night long.
05

A Favor for a Favor (All In, #2)
From the New York Times bestselling author of Pucked and A Lie for a Lie, a new stand-alone romance about trading favors, battling wills, and winning love.

When I joined Seattle’s NHL expansion team, I thought it was the start of something great. But nothing ever goes the way you expect. Take my introduction to my new neighbor. She came rolling in on the hot mess express at midnight, making a racket while she tried to get into my team captain’s apartment. Did I mention that he’s married to a woman who definitely was not her?

Imagine my surprise when I end up with an injury that has me out of the game for weeks, and she’s the one to offer to help me. I should probably add that she’s not the captain’s mistress. She’s his sexy, pastel-haired younger sister.

So we come up with an arrangement: she rehabs me so that I can get back on the ice sooner, and she can add a professional athlete that isn’t her brother to her client list. Seems simple enough. As long as I can keep my hands to myself and my hormones in check.
06

Pucked Over (Pucked, #3)
Lily LeBlanc isn’t versed in the art of casual sex, but after seven years in an on-again, off-again relationship, she’s definitely willing to give it a shot. And who better to try it with than her best friend’s boyfriend’s best friend? What could possibly go wrong? Nothing at all.

NHL player, Randy Ballistic, lives up to his last name on the ice and in the bedroom. His best friend and teammate has recently given up the puck bunnies and traded them in for a real girlfriend. And she just happens to have a seriously feisty, extra-hot best friend on the rebound. Randy’s more than happy to be Lily’s spring board back into the dating scene.

Casual sex is only casual until those pesky things called emotions get involved. Once that happens, someone’s bound to gets pucked over.
07

Pucked Up (Pucked, #2)
Miller “Buck” Butterson has been banging his way through life ever since a puck to the face fixed his messed up front teeth, and he was drafted into the NHL during his first year of college. After five years of deflecting goals on the ice and scoring them with puck bunnies across the Continental US and parts of Canada, Miller is ready for a girlfriend. A real girlfriend of the non-bunny variety. One he takes on dates and doesn’t jump into bed with after five seconds of conversation.

Miller thinks he’s found that woman in his teammate’s sister. Except, unlike Alex Waters, center, team captain and all round nice guy—who happens to be dating his step-sister—Miller’s manwhore reputation is well earned, and not blown out of proportion by the media. Beyond that minor detail, Miller doesn’t know the first thing about having a girlfriend. But he’s determined to make it happen.

What he doesn’t take into account is the amount of time and effort relationships require, or that constantly letting bunnies take selfies with him to post all over social media isn’t going to win him any points in the boyfriend department. Miller learns—not so quickly—that if he wants to make Sunshine “Sunny” Waters fall for him, he going to have to do a whole lot more than show her his stick skills in the bedroom.

Hooking Up (Shacking Up, #2)
Amalie Whitfield is the picture of a blushing bride during her wedding reception ― but for all the wrong reasons. Instead of proclaiming his undying love, her husband can be heard, by Amalie and their guests, getting off with someone else. She has every reason to freak out, and in a moment of insanity, she throws herself at the first hot-blooded male she sees. But he’s not interested in becoming her revenge screw.

Mortified and desperate to escape the post-wedding drama, Amalie decides to go on her honeymoon alone, only to find the man who rejected her also heading to the same tiny island for work. But this time he isn’t holding back. She should know better than to sleep with someone she knows, but she can’t seem to resist him. They might agree that what happens on the island should stay on the island, but neither one can deny that their attraction is more than just physical.

Filled with hilariously scandalous situations and enough sexual chemistry to power an airplane from New York City to the South Pacific, Hooking Up is the next standalone, laugh-out-loud romantic comedy from Helena Hunting, the New York Times bestselling author of the Pucked series and Shacking Up.
09

A Secret for a Secret (All In, #3)
From New York Times bestselling author Helena Hunting comes a new romance about trading secrets, breaking the rules, and playing for keeps.

My name is Ryan Kingston, and I’m a rule follower. I’ve never been in a fistfight. I always obey the speed limit. I don’t get drunk, and I definitely don’t pick up random women at bars.

Except the night I found out that my whole existence has been a lie.

I got drunk. And picked up a stranger.

Her name was Queenie, and she was everything I’m not: reckless, impulsive, and chaotic. We did shots and traded secrets. And ended up naked at my place.

She left me a thank-you note in the morning and her panties as a parting gift. But no way to contact her.

Six weeks later I’m sitting in the first official team meeting of the season, and there she is. I neglected to mention that I’m the goalie for Seattle’s NHL team.

And Queenie? Turns out she’s the general manager’s daughter.
10

I’m notorious for parties and excess. I have the most penalty minutes in the league. I get into the most fights. I take the most hits. I’m a player on and off the ice. I’m the one women with no inhibitions want.

Not because I like the notoriety, but because I don’t know how to be any other way.

I have secrets. Ones I shared with the wrong person, and she used them against me. Sometimes she still does. I should cut ties. But she makes it difficult, because she’s the kind of bad I deserve.

At least that’s what I believed until someone from my past gets caught up in my present. She’s all the good things in this world. She lights up my dark.

I shouldn’t want her.

I should leave her alone.

***A Standalone novel in the Pucked series.***