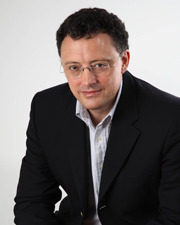 Leante graduated in Classical Philology from the University of Murcia. He has lived in Alicante since 1992, where he worked as a high school teacher until 2009.[2] He published his first novel at age 20, but it was not until 2007, after winning the Alfaguara Prize with his novel See How Much I Love You (in Spanish, Mira si yo te querré), that he began to devote himself entirely to literature. His latest novel, Red Moon (in Spanish, La luna roja), published in Spain in 2009, is a gripping story between a writer and translator, between Alicante, Berlin and Istanbul.