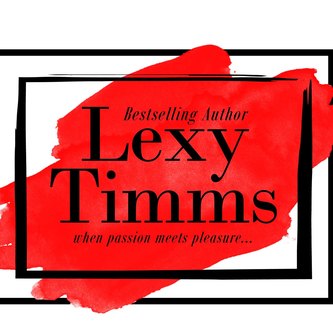 Lexy Timms is a mom, business woman, dreamer and writer. She finally decided to write her first romance novel and Saving Forever is her debut story.

The Boss (Managing the Bosses #1)
From Best Selling Author, Lexy Timms, comes a billionaire romance that'll make you swoon and fall in love all over again.

Jamie Connors has given up on finding a man. Despite being smart, pretty, and just slightly overweight, she's a magnet for the kind of guys that don't stay around.

Her sister's wedding is at the foreground of the family's attention. Jamie would be find with it if her sister wasn't pressuring her to lose weight so she'll fit in the maid of honor dress, her mother would get off her case and her ex-boyfriend wasn't about to become her brother-in-law.

Determined to step out on her own, she accepts a PA position from billionaire Alex Reid. The job includes an apartment on his property and gets her out of living in her parent's basement.

Jamie has to balance her life and somehow figure out how to manage her billionaire boss, without falling in love with him.

** The Boss is book 1 in the Managing the Bosses series. All your questions won't be answered in the first book. It may end on a cliff hanger.

For mature audiences only. There are adult situations, but this is a love story, NOT erotica.
02

The Boss Too (Managing the Bosses #2)
From Best Selling Author, Lexy Timms, comes a billionaire romance that'll make you swoon and fall in love all over again.

Jamie Connors has decided a job is more important than a boyfriend. She's landed an awesome position working as billionaire Alex Reid's personal PA. It is not meant to be a job with benefits and yet she finds herself in Alex' bed. Despite being smart, pretty, and slightly overweight, she doesn't believe she's attractive enough for a man like Alex.

Trying to manage work and put as much time into her sister's wedding, Jamie finds herself trying to please everyone. Her sister's wedding is at the foreground of the family's attention. Jamie would be fine if her sister wasn't so bossy, if her mother would stop nagging and her awful ex-boyfriend wasn't about to become her brother-in-law.

Jamie has to learn to love herself again, speak up for herself and have the confidence to go after what she wants. She also needs to prove to Alex that she's perfect for her job and for his bed.

For mature audiences only. There are adult situations, but this is a love story, NOT erotica.
04

One You Can't Forget (Hades' Spawn MC #1)
From Best Selling Author, Lexy Timms, comes a motorcycle club romance that'll make buy a Harley and fall in love all over again.

Emily Rose Dougherty is a good Catholic girl from mythical Walkerville, CT. She had somehow managed to get herself into a heap trouble with the law, all because an ex-boyfriend has decided to make things difficult.

Luke “Spade” Wade owns a Motorcycle repair shop and is the Road Caption for Hade’s Spawn MC. He’s shocked when he reads in the paper that his old high school flame has been arrested. She’s always been the one he couldn’t forget.

Will destiny let them find each other again? Or what happens in the past, best left for the history books?
05

Saving Forever - Part 1 (Saving Forever, #1)
Charity Thompson wants to save the world, one hospital at a time. Instead of finishing med school to become a doctor, she chooses a different path and raises money for hospitals – new wings, equipment, whatever they need. Except there is one hospital she would be happy to never set foot in again--her fathers. So of course he hires her to create a gala for his sixty-fifth birthday. Charity can’t say no. Now she is working in the one place she doesn’t want to be. Except she’s attracted to Dr. Elijah Bennet, the handsome playboy chief.
Will she ever prove to her father that’s she’s more than a med school dropout? Or will her attraction to Elijah keep her from repairing the one thing she desperately wants to fix?

Who's the Boss Now (Managing the Bosses #3)
From Bestselling Author, Lexy Timms, comes a billionaire romance that'll make you swoon and fall in love all over again.

How close can you get to the fire and not get burned?

Landing the dream job, working and dating her incredibly hot boss and at the same time gaining the confidence she never had, Jamie doesn't think live could get any better.

She's helping to manage a multi-billion dollar company. Her family issues seemed to be resolved and even though she and Alex have to figure out the wrinkles, it looks like they'll be able to be professional at work and romantic after.

Except perfect is quite exactly how Jamie imagined it would be.

This is a steamy romance, NOT erotica
07

Driving Home for Christmas (Billionaire Holiday #1)
USA Today Bestselling Author, Lexy Timms, shares a holiday romance that’ll warm the heart and having you wishing on love—or beating it with a stick!

"Love brings up emotions that run the gamut from agony to ecstasy. Love can inspire us to accomplish some of the craziest and most amazing feats."


Colin Murphy Is the CEO of Murphy Inc and is a workaholic. Christmas, or any holiday in face, doesn't mean much to him. When his business trip travel plans get interrupted by a freak snowstorm, he’s forced to find a way home by other means.

Abigail Thompson can’t wait for this year to be over. After losing her job, her boyfriend and apartment, she’s ready to go home for a much-needed break and to regroup. But when her plane is grounded because of a snow storm, she has to find another way. She makes her way to the car rentals only to find the last car has just been given to a tall dark sexy man. Definitely not Santa, his name is Colin Murphy. When Colin finds out they’re head in the same direction, he offers her a lift. It’s nearly Christmas afterall.

What should be an easy 8-hour drive turns into 2 days of mishaps and mayhem.

She knows every Christmas song off by heart, even though she can’t carry a tune. She’s happy, he’s a real Christmas Grinch. Will this unplanned fiasco be the start of something magical?
08

Love the Boss (Managing the Bosses #4)
From Bestselling Author, Lexy Timms, comes a billionaire romance that'll make you swoon and fall in love all over again.
Newly crowned Senior Partner, Jamie Connors, is determined to prove to her boss that she is worth her weight in gold. More like diamonds, well one diamond actually.

Billionaire Alex Reid has given her a promotion with her job, and also with his heart. A man who claims to have no knowledge of how to love, he's given her a key to his heart and his house. He wants her to move in together.

She has the job of her dreams and the perfect man to go with it. However, is moving in enough for Jamie?

Is she willing to put her job on the line and risk everything to show Alex that what she really wants is to be together forever?

This is steamy romance, NOT erotica.
09

Confession of a Tattooist (Tattooist #1)
10

Aspiring college athlete Aileen Nessa is finding the recruiting process beyond daunting. Being ranked #10 in the world for the 100m hurdles at the age of eighteen is not a fluke, even though she believes that one race, where everything clinked magically together, might be. American universities don’t seem to think so. Letters are pouring in from all over the country.
As she faces the challenge of differentiating between a college’s genuine commitment to her or just empty promises from talent-seeking coaches, Aileen heads to Gatica State University, a Division One school, on a recruiting trip.
The university’s athletic program boasts one of the top sprint coaches in the country. The beautiful old buildings on campus and Ivy League smarts seems so above her little Ohio town upbringing. All Aileen needs to convince her to sign her letter of intent is a recruiting trip that takes her breath away.
Tyler Jensen is the school’s NCAA champion in the hurdles and Jim Thorpe recipient for top defensive back in football. His incredible ocean blue eyes and confident smile make Aileen stutter and forget why she is visiting GSU. His offer to take her under his wing, should she choose to come to Gatica, is a temping proposition that has her wondering if she might be making a deal with an angel or the devil himself.

* This is NOT erotica* It is a new adult & college sport romance.
For mature readers only. There are sexual situations, but no graphic sex.