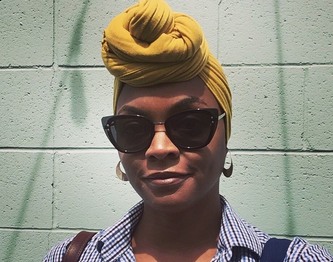 Alyssa Cole is an award-winning author of historical, contemporary, and sci-fi romance. Her Civil War-set espionage romance An Extraordinary Union was the RT Reviewers’ Choice Award’s Best Book of 2017 and the American Library Association’s RUSA Best Romance for 2018, and A Princess in Theory was one of the New York Times’ 100 Notable Books of 2018. She’s contributed to publications including Bustle, Shondaland, The Toast, Vulture, RT Book Reviews, and Heroes and Heartbreakers, and her books have received critical acclaim from The New York Times, Library Journal, BuzzFeed, Kirkus, Booklist, Jezebel, Vulture, Book Riot, Entertainment Weekly, and various other outlets. When she’s not working, she can usually be found watching anime or wrangling her pets.

Sydney Green is Brooklyn born and raised, but her beloved neighborhood seems to change every time she blinks. Condos are sprouting like weeds, FOR SALE signs are popping up overnight, and the neighbors she’s known all her life are disappearing. To hold onto her community’s past and present, Sydney channels her frustration into a walking tour and finds an unlikely and unwanted assistant in one of the new arrivals to the block—her neighbor Theo.

But Sydney and Theo’s deep dive into history quickly becomes a dizzying descent into paranoia and fear. Their neighbors may not have moved to the suburbs after all, and the push to revitalize the community may be more deadly than advertised.

When does coincidence become conspiracy? Where do people go when gentrification pushes them out? Can Sydney and Theo trust each other—or themselves—long enough to find out before they too disappear?
02

A Princess in Theory (Reluctant Royals, #1)
From acclaimed author Alyssa Cole comes the tale of a city Cinderella and her Prince Charming in disguise . . .

Between grad school and multiple jobs, Naledi Smith doesn’t have time for fairy tales…or patience for the constant e-mails claiming she’s betrothed to an African prince. Sure. Right. Delete! As a former foster kid, she’s learned that the only things she can depend on are herself and the scientific method, and a silly e-mail won’t convince her otherwise.

Prince Thabiso is the sole heir to the throne of Thesolo, shouldering the hopes of his parents and his people. At the top of their list? His marriage. Ever dutiful, he tracks down his missing betrothed. When Naledi mistakes the prince for a pauper, Thabiso can’t resist the chance to experience life—and love—without the burden of his crown.

The chemistry between them is instant and irresistible, and flirty friendship quickly evolves into passionate nights. But when the truth is revealed, can a princess in theory become a princess ever after?

A Duke by Default (Reluctant Royals, #2)
Award-winning author Alyssa Cole’s Reluctant Royals series continues with a woman on a quest to be the heroine of her own story and the duke in shining armor she rescues along the way

New York City socialite and perpetual hot mess Portia Hobbs is tired of disappointing her family, friends, and—most importantly—herself. An apprenticeship with a struggling swordmaker in Scotland is a chance to use her expertise and discover what she’s capable of. Turns out she excels at aggravating her gruff silver fox boss…when she’s not having inappropriate fantasies about his sexy Scottish burr.

Tavish McKenzie doesn’t need a rich, spoiled American telling him how to run his armory…even if she is infuriatingly good at it. Tav tries to rebuff his apprentice, and his attraction to her, but when Portia accidentally discovers that he’s the secret son of a duke, rough-around-the-edges Tav becomes her newest makeover project.

Forging metal into weapons and armor is one thing, but when desire burns out of control and the media spotlight gets too hot to bear, can a commoner turned duke and his posh apprentice find lasting love?
04

An Extraordinary Union (The Loyal League, #1)
As the Civil War rages between the states, a courageous pair of spies plunge fearlessly into a maelstrom of ignorance, deceit, and danger, combining their unique skills to alter the course of history and break the chains of the past . . .

Elle Burns is a former slave with a passion for justice and an eidetic memory. Trading in her life of freedom in Massachusetts, she returns to the indignity of slavery in the South—to spy for the Union Army.

Malcolm McCall is a detective for Pinkerton's Secret Service. Subterfuge is his calling, but he’s facing his deadliest mission yet—risking his life to infiltrate a Rebel enclave in Virginia.

Two undercover agents who share a common cause—and an undeniable attraction—Malcolm and Elle join forces when they discover a plot that could turn the tide of the war in the Confederacy's favor. Caught in a tightening web of wartime intrigue, and fighting a fiery and forbidden love, Malcolm and Elle must make their boldest move to preserve the Union at any cost—even if it means losing each other . . .
05

A Prince on Paper (Reluctant Royals, #3)
The Reluctant Royals series returns with a good girl searching for the life that’s not too big, and not too small, and the bad boy prince who might be just right for her…

Nya Jerami fled Thesolo for the glitz and glamour of NYC but discovered that her Prince Charming only exists in her virtual dating games. When Nya returns home for a royal wedding, she accidentally finds herself up close and personal—in bed—with the real-life celebrity prince who she loves to hate.

For Johan von Braustein, the red-headed step-prince of Liechtienbourg, acting as paparazzi bait is a ruse that protects his brother—the heir to the throne—and his own heart. When a royal referendum threatens his brother’s future, a fake engagement is the perfect way to keep the cameras on him.

Nya and Johan both have good reasons to avoid love, but as desires are laid bare behind palace doors, they must decide if their fake romance will lead to a happily-ever-after.
06

While her boss the prince was busy wooing his betrothed, Likotsi had her own love affair after swiping right on a dating app. But her romance had ended in heartbreak, and now, back in NYC again, she's determined to rediscover her joy--so of course she runs into the woman who broke her heart.

When Likotsi and Fabiola meet again on a stalled subway train months later, Fab asks for just one cup of tea. Likotsi, hoping to know why she was unceremoniously dumped, agrees. Tea and food soon leads to them exploring the city together, and their past, with Fab slowly revealing why she let Likotsi go, and both of them wondering if they can turn this second chance into a happily ever after.
07

Can't Escape Love (Reluctant Royals, #2.6)
Regina Hobbs is nerdy by nature, businesswoman by nurture. She's finally taking her pop culture-centered media enterprise, Girls with Glasses, to the next level, but the stress is forcing her to face a familiar supervillain: insomnia. The only thing that helps her sleep when things get this bad is the deep, soothing voice of puzzle-obsessed live streamer Gustave Nguyen. The problem? His archive has been deleted.

Gus has been tasked with creating an escape room themed around a romance anime…except he knows nothing about romance or anime. Then mega-nerd and anime expert Reggie comes calling, and they make a trade: his voice for her knowledge. But when their online friendship has IRL chemistry, will they be able to escape love?
08

The A.I. Who Loved Me
Listening Length: 5 hours and 18 minutes

Trinity Jordan leads a quiet, normal life: working from home for the Hive, a multifunctional government research center, and recovering from the incident that sent her into a tailspin. But the life she’s trying to rebuild is plagued by mishaps when Li Wei, her neighbor’s super sexy and super strange nephew, moves in and turns things upside down. Li Wei’s behavior is downright odd—and the attraction building between them is even more so. When an emergency pulls his aunt away from the apartment complex, Trinity decides to keep an eye on him…and slowly discovers that nothing is what it seems. For one thing, Li Wei isn’t just the hot guy next door—he’s the hot A.I. next door. In fact, he’s so advanced that he blurs the line between man and machine. It’s up to Trinity to help him achieve his objective of learning to be human, but danger is mounting as they figure out whether he’s capable of the most illogical human behavior of all…falling in love.
09

A Hope Divided (The Loyal League, #2)
The Civil War has turned neighbor against neighbor--but for one scientist spy and her philosopher soldier, war could bind them together . . .

For three years of the War Between the States, Marlie Lynch has helped the cause in peace: with coded letters about anti-Rebel uprisings in her Carolina woods, tisanes and poultices for Union prisoners, and silent aid to fleeing slave and Freeman alike. Her formerly enslaved mother's traditions and the name of a white father she never knew have protected her--until the vicious Confederate Home Guard claims Marlie's home for their new base of operations in the guerilla war against Southern resistors of the Rebel cause.

Unbeknowst to those under her roof, escaped prisoner Ewan McCall is sheltering in her laboratory. Seemingly a quiet philosopher, Ewan has his own history with the cruel captain of the Home Guard, and a thoughtful but unbending strength Marlie finds irresistible.

When the revelation of a stunning family secret places Marlie's freedom on the line, she and Ewan have to run for their lives into the hostile Carolina night. Following the path of the Underground Railroad, they find themselves caught up in a vicious battle that could dash their hopes of love--and freedom--before they ever cross state lines.
10

Radio Silence (Off the Grid, #1)
No one expects the apocalypse.

Arden Highmore was living your average postgrad life in Rochester, New York, when someone flipped the "off" switch on the world. No cell phones, no power, no running water—and no one knows why. All she and her roommate, John, know for sure is that they have to get out, stat. His family's cabin near the Canadian border seemed like the safest choice.

When scavengers attack, it's John's ridiculously handsome brother, Gabriel, who comes to the rescue. He saves Arden's life, so he can't be all bad…but he's also a controlling jerk who treats her like an idiot. Now their parents are missing and it seems John, Gabriel, their kid sister, Maggie, and Arden are the only people left alive who aren't bloodthirsty maniacs.

No one knows when—or if—the lights will come back on and, in the midst of all that, Arden and Gabriel are finding that there's a fine line indeed between love and hate. How long can they expect to last in this terrifying new world, be it together or apart?