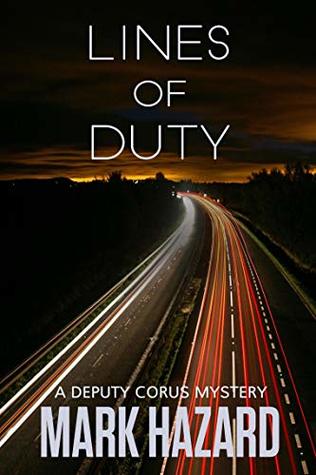 The unique hero you didn’t know you needed. The series you didn’t know you’ve been missing.
From lauded author Mark Hazard comes a new off-beat crime series about a man with one name, a hidden past, and an uncontrollable urge to root out villainy.

Mere weeks after returning from his final deployment, Corus is a cadet at an elite police academy in Seattle. Wh The unique hero you didn’t know you needed. The series you didn’t know you’ve been missing.
From lauded author Mark Hazard comes a new off-beat crime series about a man with one name, a hidden past, and an uncontrollable urge to root out villainy.

Mere weeks after returning from his final deployment, Corus is a cadet at an elite police academy in Seattle. While doing grunt work at a local precinct, he comes across a set of diamonds taken from the scene of an unsolved hit-and-run. Not only did the diamonds go unclaimed, but the still-living victim is nowhere to be found. When the diamonds turn out to be fakes, it’s one too many oddities in an attempted murder with no suspects.

Instincts forged in covert action plunge Corus headlong into criminal ranks, but taking the fastest route to answers runs roughshod over the delicate procedural approach he’s supposed to be learning. Corus knows he’s threatening his new life and career in the process, but putting the mission before self-preservation is the hardest habit of all to break.

The one man who can help Corus sort through his issues is the least likely of all. Albert Chu is a cheery and childlike cadet who's failing the academy but has a knack for getting into Corus' head. In trying to rein Corus in, he ends up proving his mettle, and together they fight to prevent multiple murders and foil a kidnapping plot, even while the eye of the law they hoped to serve is turned on their actions.Can Corus unite the lines of duty pulling him in different directions, or will he end up another casualty of the war he brought home?
Through Corus’ journey runs a cracking mystery/crime story with humor, thrills, and a cast of well-drawn side characters, from small-time gangsters and rodeo riff-raff to Corus' wife who grapples with her own grifter impulses. The Deputy Corus series is precisely the blend of action and depth that readers of James Patterson and Lee Child are looking for.What readers are saying about the series: “…Nuance of character development that is often lacking these days. - especially with books that deal with military or police.” “A heck of a caper that'll make you laugh a lot more often than most crime novels.”
“Not at all the same cookie cutter outline that most crime writers follow for their main character. It's much more complex and enjoyable.” "Exactly the story I was waiting for!" "In Lines of Duty, Hazard paints a scene with his words that transported me into a new world and created thought-provoking and enticing dilemmas. This story is entertaining and engaging. I recommend Lines of Duty 100% to anyone who loves a good mystery." "If you’re looking for a paint-by-numbers procedural, this isn’t the book for you, but if you crave deeply human crime drama with a fair share of thrills and humor, then this is a must-read." “This series is as enjoyable as Lee Child’s Reacher books.”